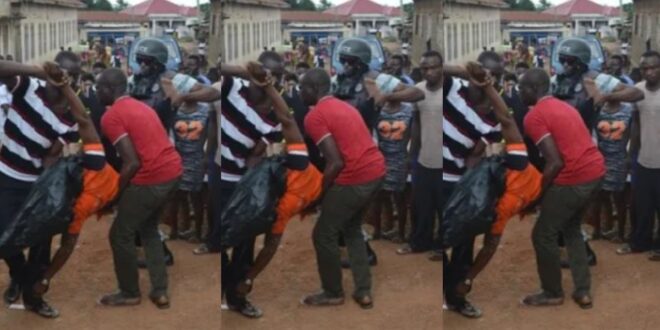 Kumasi: 44-year-old man shỠt dẽad in front of his 12-year-old son and wife by armed robbers

On Saturday, November 20, 2021, Michael Agbo-Kulu, alias Eli, was shot dead in front of his wife and 12-year-old son during a robbery attempt.

At his new site in Anyinam, Kumasi, the 44-year-old victim was assaulted.

According to an eyewitness and a relative, the attacker who used his son as bait robbed the family at gunpoint and shot the victim.

“In fact, they told the kid to tell the father that he had a stomach ache so the father should come out and help him and sort him out. Out of that the father opened the door and they shot the father,” the eyewitness said.

Agbo-Kulu was rushed to the Asafo Agyei Hospital with gunshot wounds to his lower abdomen, where he was pronounced dead.

The most recent incident has instilled fear in the community, prompting residents to demand police protection. They are pleading with the authorities to beef up patrols in the area.

‘”I do not really know why; the police are nearby but I don’t know if it’s because they are not many there, that’s why all these robberies keep happening,” one of the residents told Asaase News.