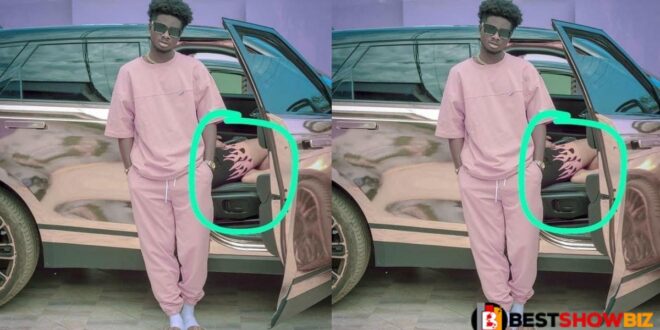 Kuame Eugene has finally given Ghanaians a glimpse into his love life by flaunting his unnamed girlfriend in his new Range Rover, which he received as a present.

Musicians are often considered as womanizers and other such traits. You can picture the amount of females that are at Kuame Eugene’s beck and call as a charming young celebrity.

He previously mentioned how girls kept sending him relationship offers and offering to purchase him a vehicle if he accepts to date them in his DMs.

Well, a thorough glance inside the car reveals a lovely lovely girl sat in the front seat obscuring her face, as seen in this photo he tweeted earlier today standing behind his new Range Rover. Is the Rockstar concealing his lover from the public eye, or did she just not realize he was posing for a photo? I will take your estimate as good as mine.

Take a look at the image and make your own decision.