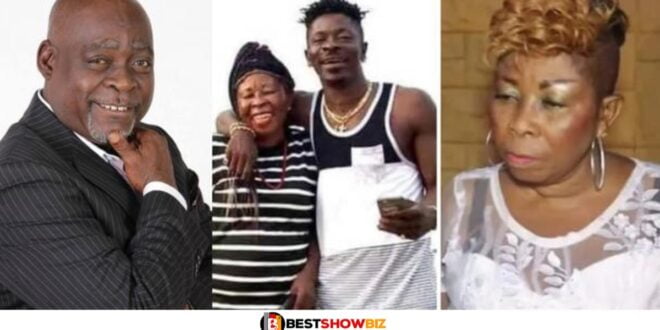 Due to the fact that Kofi Adjorlolo and Elsie Avemegah, mother of Shatta Wale, are no longer involved in a love relationship, the much-awaited wedding between the two will no longer take place.

Following two failed attempts at wedlock, the seasoned actor was ready to tie the knot with the Shatta Mama after the two of them confirmed their love for one another in an exclusive interview on Hot FM.

However, recent evidence says that the two have come to an agreement that will result in them parting ways.

This information was disclosed by Reagan Mends, the publicist for Shatta Mama. She revealed the split on the social chat show titled “Ay3 Hu” that is broadcast on Hot FM.

Read Also  "Agradaa should not be blamed, her victims are greedy"- Afia Schwar

He explained, ”After giving me the go-ahead to publish the news of their marriage, Kofi Adjorlolo denied ever telling me to publish it…so he called Shatta Mama and told her he wouldn’t continue with the relationship again.”

Earlier, Shatta Wale gave his response to the news of his mother’s rumored romantic affair with veteran actor Kofi Adjorlolo when the story initially emerged in July.

Shatta Wale’s mother is said to have had the affair with Kofi Adjorlolo.

The creator of the famous song “Bullet Proof” revealed this information during an exclusive interview on HITZ FM. He stated that he will be very thrilled and may even sing at the wedding ceremony.

Read Also  Ghana Police arrest two people over the death of American model Tyger who died in a hotel room in Accra.

In his own words; “If Kofi Adjorlolo wants to marry my mother, that’s cool. He has every right to move to her. Kofi Adjorlolo is like Denzel Washington.“