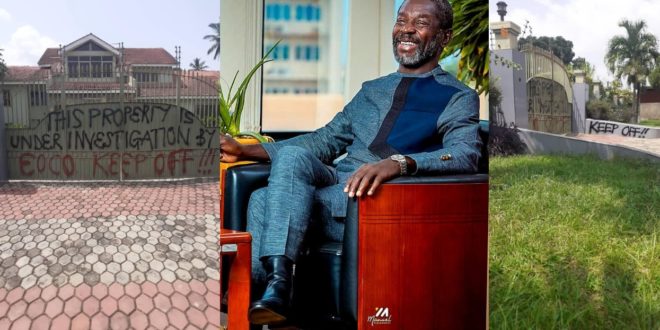 Kofi Amoabeng, the CEO of the defunct UT bank from reports is currently in a hot pepper after EOCO seized his plush mansion.

according to reports sighted on mynewsgh, the house which belongs to Kofi Amoaneing who is also an ex-military man is located at Kukurantumi in the East Akim District of the Eastern Region.

from mynewsgh, the Economic and Organized Crime Office (EOCO) started the operation last Friday and warned people to stay off the property because it was under investigation.

photos of the house have a boldly written that; “This property is under investigation by EOCO Keep Off”.

an official with EOCO confirmed the news but failed to share more information about the issue while Kofi Amoabeng and his Lawyers failed to about the matter when contacted.