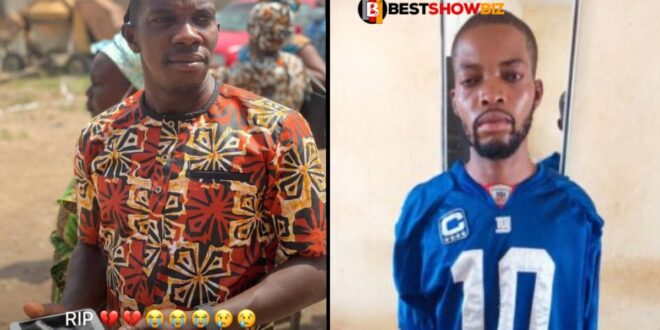 K!ller of Kumasi Uber driver reveals how he tricked him into the bush to murder him (video)

The main suspect in the murder of a Kumasi Uber driver has been apprehended by Kumasi police.

The Uber driver was discovered dead with parts of his body missing, leading some to assume he was murdered for a ritual.

Following his arrest, Rashid Ibrahim told the police how he killed the driver.

According to the suspect, he met the driver at 1 p.m. near the High School Junction in Atonsu, and when he stopped his car, he indicated that he was ‘dropping’ to Feyiase without seeking a trip through the Uber app.

When they arrived at Feyiase, the suspect stated that he would bring some speakers from his home to the high school junction.

He requested that the driver accompany him to the house to assist him in carrying the speakers, which are rather heavy.

He ordered the driver to turn so they could take a different road while strolling together, and that is when he stabbed him.

The driver battled with him, but he was overwhelmed by his knife, which he used to stab him numerous times and remove his head.

He cleaned himself with stagnant water in a reservoir near the site after removing his head and concealing it so he could retrieve it at the appropriate moment since he overheard a commotion from people approaching the area.

He immediately dashed to a neighboring residence and demanded a shirt.

Fortunately, an inquiry by the police resulted in his arrest.

Popularly known as the webmazta; Cobby Collins is an established web designer, a computer instructor, and content creator. You can contact him via email cobby[email protected] or via Whatsapp only on +233204875306