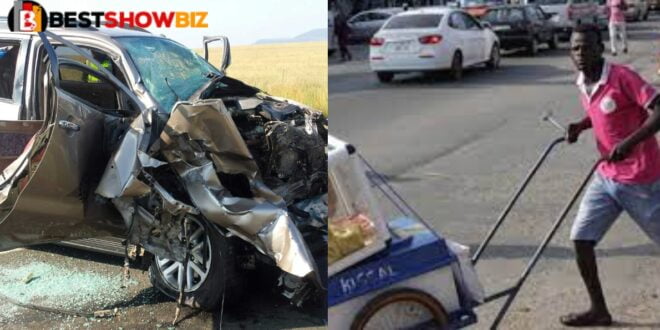 Residents of Klagon and Lashibi in the capital have been shaken by a horrific event that occurred this afternoon.

A private vehicle traveling at excessive speed collided with a yogurt vendor on his bicycle.

Both the car’s driver and the ice cream vendor are believed to have died in the crash.

Early this morning, an accident occurred on the stretch of road that connects Klagon and Lashibi-just after the Lashibi funeral houses and before the Klagon water treatment plant.

Large gullies on either side of the road cause flooding during the rainy season on that particular stretch of the route.

Due to the recent rains, the speeding car lost control and tumbled into a ditch, which is currently flooded as a result of the accident.

Unfortunately, it looks that the driver also collided with an innocent yogurt vendor who was riding his bike on the side of the road.

It is now unclear what the conditions are for the two.

A tow vehicle has been dispatched to the scene, as well as the police.