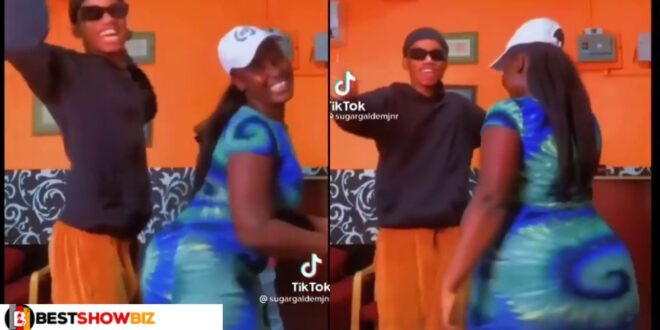 Kidney, the well-known lookalike of musician Kidi, has snatched a heavily loaded Ghanaian lady after rising to popularity.

In a recent video that has surfaced on social media, Kidi’s lookalike has been observed grooving with a lady, according to reports.

Kidi’s lookalike, who goes by the moniker kidney, recently became a social media celebrity after meeting the singer Kidi for the first time.

Photos of him and Kidi went viral on social media following their encounter because they had a striking resemblance to one another.

According to reports, Kidney appears to be taking advantage of the small recognition he has gained in order to pursue bigger goals, and he has attracted the attention of a lady who is willing to spend time with him.

Wahala for those who do not enjoy themselves!

Social media fans, on the other hand, are greatly loving Kidi’s low-budget video, especially because he is not leaving any opportunities to chance.