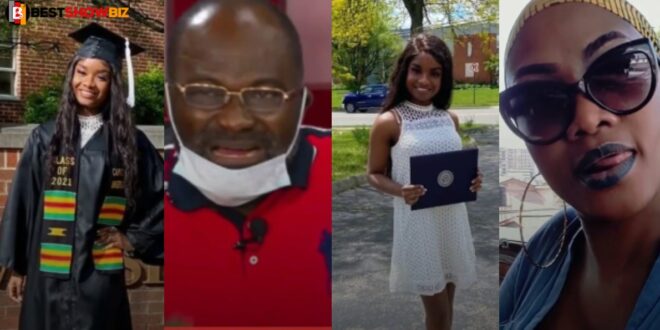 Honorable Kennedy Agyapong’s baby mama, Moira Araba Dawson, has gone insane again and is out to punish him!

Moira Araba Dawson has reminisced about past events that have made her enraged at Kennedy Agyapong!

Hon. Kennedy Agyapong allegedly drugged and raped her while she was still in school, according to her. Kennedy Agyapong had summoned her, stating that there was a modeling competition going on and that she should go.

Kennedy Agyapong kidnapped her for 5 days, during which she was drugged and raped many times.

She went on to describe an incident that occurred recently between her, Ken, and their daughter, Anell Agyapong.

Hon Kennedy Agyapong recently revealed that his daughter, Anell Agyapong, is a drug addict and a dropout, despite the fact that he had squandered a large sum of money on her schooling.

He went on to declare that he had abandoned her as his daughter and that nothing would ever convince him to accept her again.

Moira Dawson claims that her daughter graduated from university without the assistance of Kennedy Agyapong.

As she has been informed, Kennedy Agyapong separates her daughter from his 22 children. If he ever refers to her daughter as his child, she believes thunder will strike him dead.