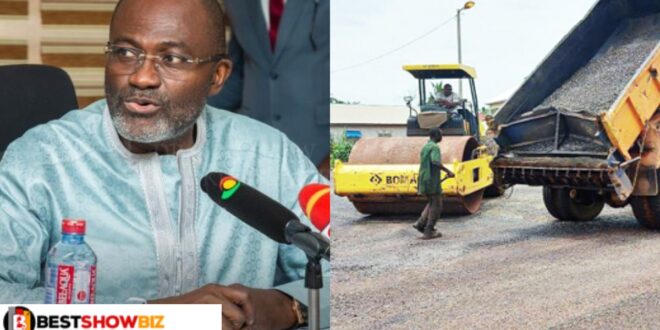 Hon. Kennedy Agyapong allegedly spent his own money to construct a road in Tema, the town where he resides.

According to reports, the business mogul has erected a road connecting his residence in Tema to the Tema harbor.

The recent road construction was featured on TV Ghana, a Ghanaian YouTube channel where their reports focus on the town of Tema.

The comments section beneath the video post is flooded with praise for the controversial politician for constructing the road with his own money.

One commenter further inquired as to why the Assin Central MP would abandon his constituency’s poor roads in order to support road-building in a city like Tema, which has far better roads than Assin Central.

Meanwhile, Kennedy Agyapong once revealed he almost lost his seat due to the bad roads in his Assin Central constituency.

He said even though it is not his responsibility to construct roads, his votes were “drastically” low during the 2020 parliamentary elections because contractors have failed to complete a road in his constituency.