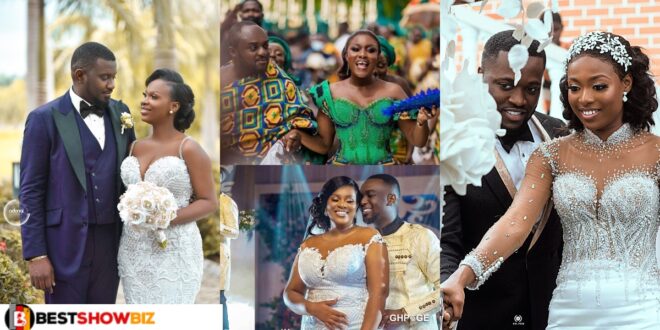 Weddings in Ghana have recently been characterized by flamboyance, displays of wealth, and the ability to make the entire event trend online for days.

Many people are very particular about how they walk down the aisle, and they spend months or years planning unforgettable experiences. A great deal of thought goes into the planning process, and many people are consulted to ensure that the wedding is the talk of the town.

Nowadays, weddings in Ghana have become a festival, and one must be very particular about how they present themselves at such events. Ghanaian weddings have become a full-time job for event planners, from searching the internet and dictionaries for hashtags to securing the most talked-about businesses.

We decided to bring you 7 weddings in Ghana that made headlines and sparked debate for weeks.

2.Hendee ’19 The 2019 wedding between Henry, known on social media as Lil Henry Fitz and Dela, also known by the social media name Mrz Fitz, and was hashtagged#Hendee19, took over social media.

This wedding was attended by the high and mighty in society including Nana Aba Anamoah and Serwaa Amihere.

3. Kency 2020 Kennedy Osei’s wedding to Tracy Ameyaw became the talk of the town for weeks following the extravagance that characterized the whole event. The son of media mogul and businessman Osei Kwame Despite really outdid himself to show that his dad was one of the richest men in the country.

4. Dwomo fata Barima The current wedding making massive waves online is the one between Anita Boakye, daughter of the CEO of Anita Hotel and Barima Osei Mensah, CEO of Adinkra Meat Pie. The wedding took a whopping 4 days to complete. It is going down as one of Ghana’s most expensive weddings yet.

5. THEDOXAUNION21 The union between one Sandra and Derek caught the eye of many on social media after their wedding cake popped up online.Their cake could go down as the biggest wedding cake in Ghana yet. It was designed in a shape of a V8 car.

6. Sarkodie and Tracy Rapper Sarkodie and Tracy took over social media with their July 17, 2018 wedding which saw Ghana’s first hanging cake at a celebrity’s wedding. Many people in Ghana’s entertainment space graced the wedding.

7. Royal Affair The wedding of Naa Dromo Korankye-Ankrah, daughter of Sam Korankye Ankrah of the Royal House Chapel trended for days after the man of God reportedly gifted the daughter $1 million.

9. John Dumelo and Gifty Mawunya Actor John Dumelo wowed many on social media when he tied the knot to his ever-beautiful wife, Gifty.