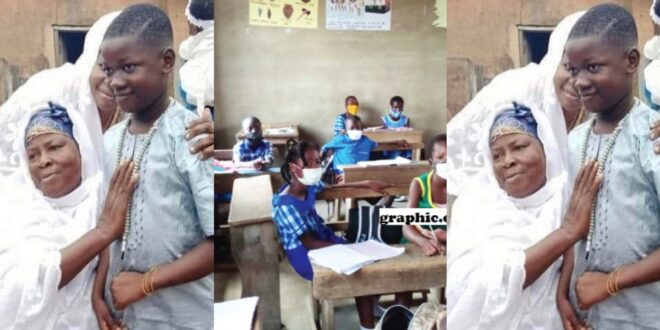 #Kasoamurder: Classmates of Ishmael cry and mourn the passing of their mate.

Ishmael Mensah Abdallah’s classmates, who praised him for his calmness and kindness, said they were still coming to grips with his passing.

They remembered being in his company last Thursday, just before the Easter break, and said it brought back vivid memories of him.

Master Abdallah’s classmates spoke with the Daily Graphic in separate interviews yesterday during a visit to their academy, the Maranatha Preparatory and Junior High School in Millennium City, near Kasoa.

During the visit, it was noted that Ishmael’s desk in his class was empty, despite the fact that all other desks were filled.

Master Richmond Mensah Amoh, one of Ishmael’s classmates, defined him as a kind guy who was always willing to support his peers.

He said that if he was questioned for a textbook or anything else that he had, he offered it to him without hesitation.

Master Kwasi Kwarfo, another classmate, said Ishmael was so kind that he was able to share everything he had with his classmates.

Read Also  John Mahama is a thief; He stole my gold in 2016 – Akua Donkor alleges

He said that the class will miss him because of his generosity to all.

Master Abdul Rahman, one of Ishmael’s closest friends, said he used to play with the deceased in kindergarten, adding, “He was loving, polite, cool, and connected well with everyone in the class.”

Mr Godlove Yeboah, an instructor in Class Four, said the children had lost some zeal heading into the test after the death of a classmate.

“We are revising for the exam next week, but their spirits are low, as you can see.” Ishmael would be sorely missed in school. He was an obedient boy who was always willing to lend a hand,” he added.

Ishmael had been a frequent student at the school since the nursery level, according to the school’s proprietor, Rev. John Richard Baffour-Awuah, who expressed his sadness over the boy’s death.

“Here, two of his older siblings finished JHS. Now that he used to go to school with another older sibling, I am not sure if that older sibling can do without Ishmael.

He said, “His death was catastrophic to the school, and we have yet to resolve it.”

When school resumed after the Easter break, Rev. Baffour-Awuah said he had to go to Ishmael’s class to comfort the students because they had all broken down when they learned of his passing, adding, Some were even afraid, but he had to calm them down.

Mr Isaac Odae, the school’s Headmaster, said he did not accept it when he learned about Ishmael’s death because the child had been seen “well and happy only last Thursday.”

Meanwhile, Shirley Asiedu-Addo claims that a fetish Priestess was detained by a team of police officers at Amanase near Suhum in the Eastern Region to help with inquiries into the ritual murder of Ishmael.

Last Saturday, Ishmael, 10, was murdered after Nicholas Kini, 18, and Felix Nyarko, 16, allegedly tricked him into an unfinished building at Coca Cola, near Lamptey Mills, a Kasoa suburb.

Last Tuesday, the Kasoa Circuit Court remanded the two offenders into police detention and ordered them to appear in court on April 20, 2021.

In the meantime, family sources informed the Daily Graphic that Ishmael’s body will be released for Islamic rites and burial today.