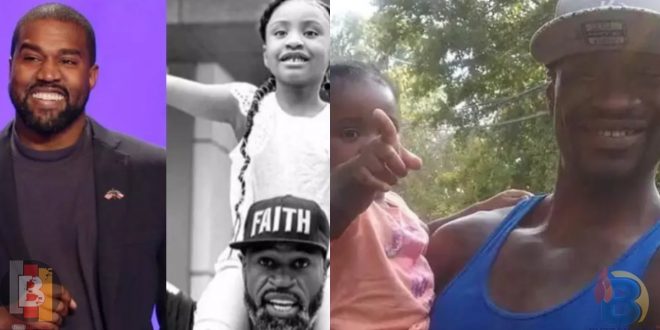 Popular American richest rapper Kanye West has shown compassion for the late George Floyd as he set up a fund to cover the cost of university for George Floyd’s six-year-old daughter Gianna.

The late George Floyd, Killed after being pinned down by the neck by officer Derek Chauvin during an arrest, left behind her daughter Gianna unsecured.

At least he will finally rest in peace upon witnessing his daughter being taken care of all thanks to Kanye West.

Kanye West also donated £1.5 million ($2m) to other causes, including paying the legal fees of Ahmaud Arbery who was killed in Georgia whilst out jogging and Breonna Taylor, an emergency medical technician killed in her own home in Louisville in this year.

Kanye has joined a host of other popular celebrities like Floyd Mayweather, Michael Jordan, and co. who have donated towards George Floyd’s family and the ‘Black Lives Matter’ movement.

The donations were confirmed by a representative for the rapper and fashion designer to American news organizations.

Following the murder of George Floyd, The rapper has participated immensely in the movement to bring a stop to racism. he was recently seen in his hometown of Chicago on Thursday as he joined school students at a protest.