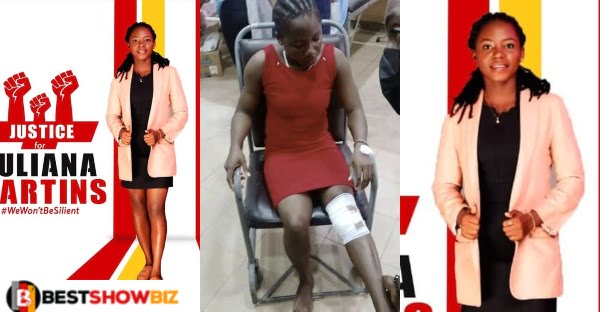 Justice for Juliana: Netizens demand justice for a student hospitalized for over a month after she was shot by police.

A female University of Benin student has been hospitalized for more than a month after reportedly being shot by a police officer in Benin, Edo state.

Juliana Martin Akpaette and other Niger Delta students enrolled in tertiary institutions attempted to visit the Nigerian Petroleum Development Company (NPDC) office in Ogba on October 28, 2021, but were denied access.

Because it was raining, they took refuge beneath the guard post and were singing sympathy songs when several police officers reportedly opened fire, injuring Juliana.

“The Niger Delta Students in Tertiary Institutions were due to have a workshop on the new Petroleum Industrial Act (PIA) on October 27 and 28, at the NPDC headquarters in Ogba, but NPDC canceled it,” a statement from a Facebook account advocating for justice says.

“Juliana and her colleagues had gone to the NPDC office for a meeting to address the conflicting concerns between the NPDC administration and the students nominated for the workshop in order to foresee a common ground.”

“Unfortunately, the pupils were denied entry for unknown reasons.” Due to the heavy rain, they sought shelter behind the NPDC’s guard post, chanting a solidarity song in an orderly and peaceful way.

Suddenly, a squad of police officers summoned by the NPDC management and led by D.S.P. Odagboyi Emmanuel appeared on the site and began firing rounds straight at the students in a hostile and violent way. Juliana was injured by a bullet fired by DSP Odagboyi Emmanuel during the procedure.

“It’s been more than a month and NPDC has yet to reply or even contact the poor innocent girl who nearly died at NPDC Ogba.” The young lady was abandoned, and she is presently suffering from physical and emotional anguish. “