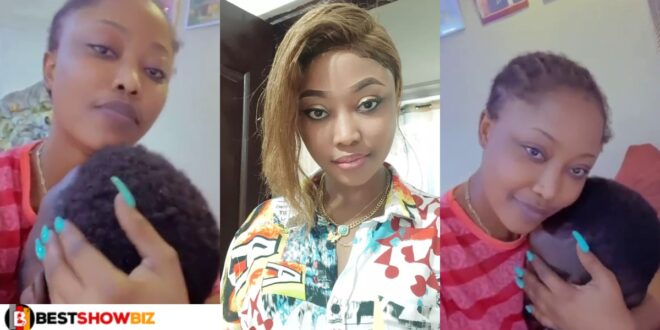 Joyce Boakye’s german borga boyfriend used and dumped her, she claims their relationship was for hype (video)

Joyce Boakye has returned to the single girl’s club after her new lover, whom she recently flaunted on social media, allegedly cheated on her and dumped her.

A few weeks ago, the popular Kumawood actress tweeted lovey-dovey photographs and videos of herself cuddling up to her boyfriend. She, on the other hand, attempted to conceal his identity for reasons unknown to her.

But it wasn’t long before bloggers figured out who the man in question was and revealed his true identity as Nana – a German borga known as a proven womanizer.

A lady named Adwoa later appeared on social media to say the man is her husband, accusing Joyce of being a husband snatcher and chastising her for ruining her marriage.

Following the exposé, it appears that the man has returned to Germany to be with his wife, leaving Joyce in Ghana empty-handed.

Joyce is currently attempting to repair her reputation as a wife snatcher and home wrecker.

Joyce recently said in an interview that all she’s been saying about acquiring a new lover over the last few weeks was a publicity gimmick for a new series in which she stars.