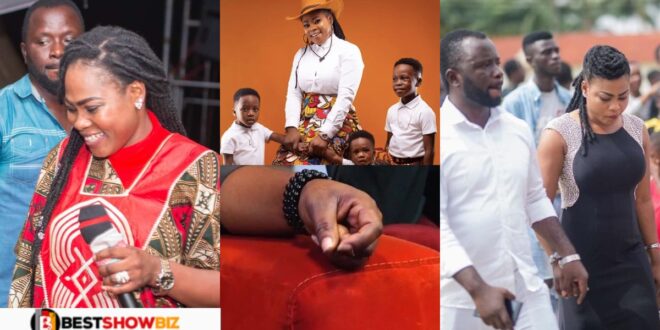 A self-proclaimed sister of Joyce Blessing’s husband has spoken out about the DNA test controversy that erupted between the pair after they divorced.

According to her, Joyce Blessing’s estranged husband, Dave Joy, is traumatized and depressed as a result of the outcome of a DNA test he conducted on his children, which revealed that one of them is not his.

In an interview, Dave Joy’s anonymous sister confirmed Joyce’s husband had conducted a DNA test for his children and that it has not resulted in tears.

According to her, Joyce Blessing has been preventing her husband from seeing his children as a result of their marital problems.

Joyce Blessing, she claims, rejected bringing her children to bond with their father several times. As a result of his struggle to meet the children, Dave Joy sought a DNA test on Joyce Blessing’s behalf. However, one of the children, the eldest, is not his.

On why they’ve spread the word so widely, the lady stated that Joyce Blessing’s estranged husband, Dave Joy, was scared and concerned, so he approached a friend and the gist exploded!