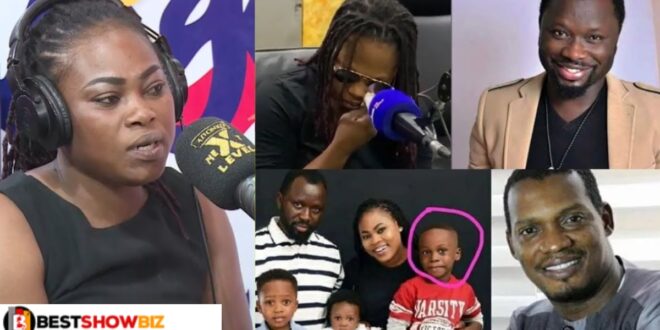 More charges have been hurled against Joyce Blessing’s divorced husband, Dave Joy, with a prophet claiming that he was once found in bed with one of his wife’s backup singers.

Prophet Eric Amponsah nicknamed Computer Man stated the above-mentioned charges, adding that he was repeatedly summoned to fix the matter.

In an interview with Oman Channel, Computer Man stated, “Joyce once caught her husband in bed with one of her singers.” She took a cab to my place out of desperation. I had to soothe her and assist in resolving the problem. That’s not everything. Joyce Blessing’s husband cheated on her multiple times, but no one ever mentioned it. “Do you have any idea what Dave has put Joyce Blessing through?”

“I invited Joyce to come and sing at my church once, and she came with her husband.” Her husband walked out to use the restroom, and Joyce followed him since he was taking too long. She finally ran into her husband outside, who was making advances at other ladies. Joyce Blessing’s main difficulty has been her husband’s proclivity for womanizing,” Computer Man stated.

Read Also  "It is not wise to take a loan for your wedding, my marriage cost me just Ghc 300"- Okyeame Kwame.

Joyce Blessing has lately been in the headlines due to rumors that her ex-husband found through a DNA test that one of their children is not his.

Following news of her alleged adultery, the gospel performer has been attacked and condemned by a large number of people.