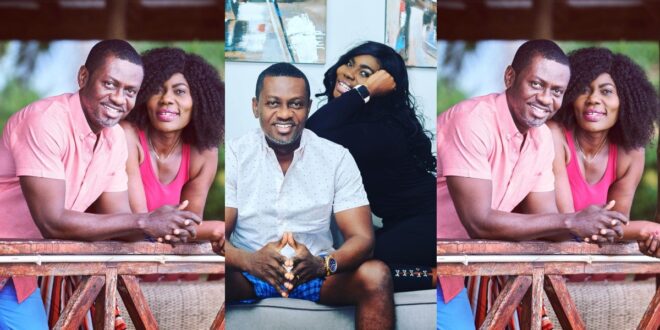 As they mark their 17th wedding anniversary, award-winning journalist Israel Laryea posted a loving photo with his wife, Louisa Laryea.

Israel Laryea, a globally renowned broadcaster, is without a question one of our country’s most loved and respected media figures.

He has performed tirelessly to earn his current reputation in the television industry. He is undoubtedly among the top five most powerful media figures the country has ever produced.

Aside from his work in the newspaper, the broadcaster has a charming love life. To commemorate their 17th wedding anniversary, he shared an adorable photo of himself and his wife on his social media page.

some detail of the image suggests that the two lovebirds married when they were young and have matured into a lovely couple in their union.

In honor of this wonderful growth, Israel Laryea took to his social media pages and posted a photo of himself and his partner, along with the caption:

“It’s been seventeen years since we got married, though known each other a couple more. We won’t claim to possess any special skill in marriage, just God’s grace from day one and two friends taking that same grace one day at a time. Happy Easter to you all“