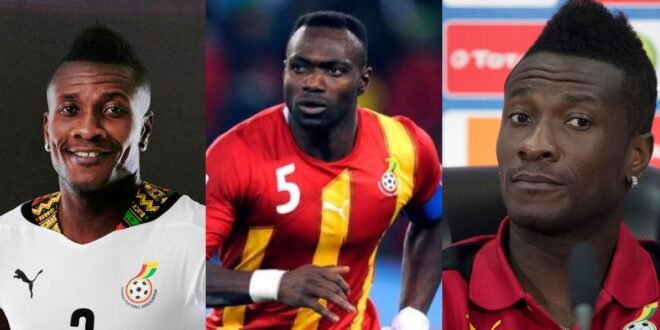 Asamoah Gyan, the former captain of Ghana’s national football team, has told an amusing story about how his teammate and former Black Stars captain, John Mensah, almost beat him up in the locker room during a football match.

Asamoah Gyan claims that John Mensah, who joined Sunderland Association FC on loan in England in 2011, nearly beat him up during a football match. Gyan explained that his team was up 1:0 at halftime, but they were struggling to score that single goal. As they came back from the first half, Sunderland’s central defender, John Mensah, tried to guard the ball so it would go out of play, but the enemy had a corner kick out of it and tied the score at 1:1.

When they returned to the locker room, Gyan confronted John about the error that led to their rivals equalizing, because the rest of the squad was terrified of John at the time and couldn’t say anything. After that, John Mensah became enraged and threatened ‘Baby Jet’ Asamoah Gyan to be vigilant or face the beatings of his life.

Meanwhile, Asamoah Gyan, 35, has signed a loan contract with Ghanaian local side Legon Cities worth over a million dollars. He’s scored a total of 212 goals in his career.

Take a look at the video below and let us know what you think: