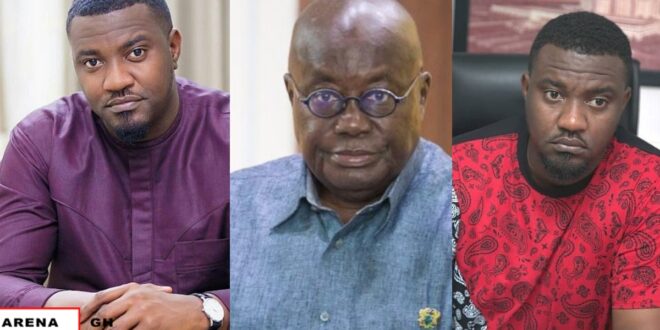 Actor John Dumelo has voiced his intention to visit President Akufo-Addo and speak with him about some of his concerns.

Mr. Dumelo, who ran for the National Democratic Congress’s Ayawaso West Wuogon seat in the 2020 election but lost, insists that the President, regardless of his political party, should be willing to listen to him.

John Dumelo expressed his concern in a tweet about the people of Santrokofi, Akpafu, Lolobi, and Likpe (SALL) in the Oti Region, who do not have a district and no representation in Ghana’s parliament.

The lack of a district for the citizens of SALL, as well as no parliamentary presentation, according to John Dumelo, does not bode well for the growth and prosperity of those regions.

President Akufo-Addo is currently on official service outside the region, but John Dumelo says he wants the president to give him an audience when he returns, especially to discuss how the citizens of SALL can be served in parliament and have a functioning district.

Since John Dumelo is from Likpe, he feels he has a responsibility to stand up for his people and use his power to get them what they deserve.

Dear @NAkufoAddo, please the people of Santrokofi, Akpafu, Lolobi and Likpe are still without a district and a constituency. They are absent at the local governance level as well as parliament. Respectfully, can I please come see you when you come back from France? Merci.

Dear @NAkufoAddo imagine some 4 towns in Bantama or Kyebi or Accra without an Mp and a DCE for 4 years. That’s what Will happen in SALL if they don’t get at least a district created for them. There will be developmental deficiency. They are stranded. #SallispartofGhana