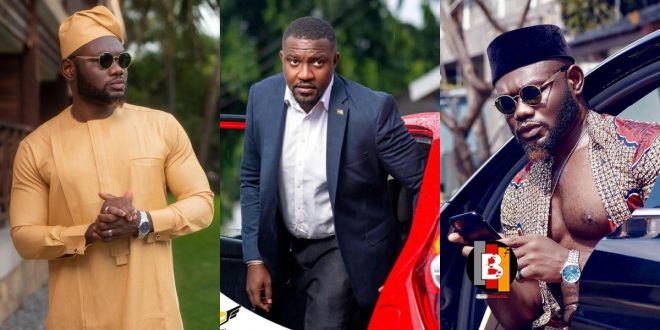 “John Dumelo Understands we love him, I Even Told Him I’ll Vote For Him” – Prince David Osei

Ghanaian actors in the likes of Prince David Osei, Kalybos, and many others are still being bashed by Ghanaians for what they describe as a betrayal toward their colleague, John Dumelo.

These actors openly campaign for the NPP in Ayawaso West Wuogon against Dumelo who is aspiring to lead the constituency at the parliamentary level in the colors of the NDC.

Well, actor Prince David Osei has finally opened up to address those criticizing the likes of him and other actors for throwing their support for the NPP.

Read Also  "It is in the character of women to be greedy, they can make two brothers kill themselves"- Pete Edochie

Speaking in a phone call interview with Akwasi Aboagye on Peace Fm, David Osei disclosed that John Dumelo does not find fault in their decision to campaign for the NPP.

He stressed that he does not hate John Dumelo and that he even met with him not long ago which they chit-chat and even told him he would be voting for him.

Prince David Osei also revealed that their campaign at the Ayawaso and two other constituencies was strictly for Nana Addo and were not even into the parliamentary elections.

He later detailed why he supports Nana Addo and the NPP as he listed some of the projects the government has implemented which is helping the vulnerable in the country.