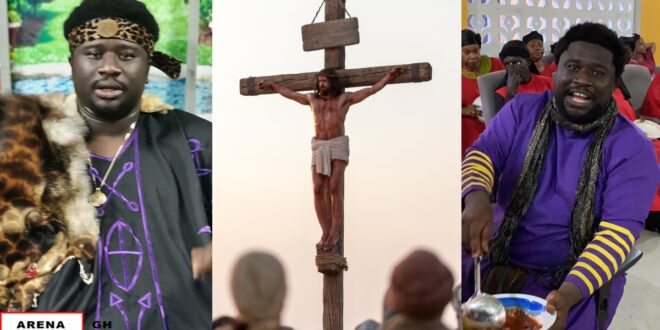 “Jesus was not crucified, he escaped”- AJajurajah

Kwabena Boakye Asiamah, a popular Ghanaian, has made some stunning statements about the historical tale of Jesus Christ’s death.

According to Prophet Asiamah’s revelations, if you grew up believing Jesus Christ died after he was crucified, you were probably fooled.

The controversial prophet Ajagurajah declared that the founder of Christianity, Jesus Christ, was not crucified as we were taught.

In an interview with Nana Aba Anamoah on Starr FM’s Starr Chat programme, Ajagurajah made the surprising discovery.

Ajagurajah stated in the interview that he believes in Jesus Christ but not in the tale of his death.

He said that Jesus was exchanged and that he was not the one crucified. As startling as this claim may be, Ajagurajah claims that individuals must research his teachings and beliefs before understanding them.

“I believe in Jesus Christ, but not in the story of his death,” he said. He was switched. He was not crucified” he said to Nana Aba.