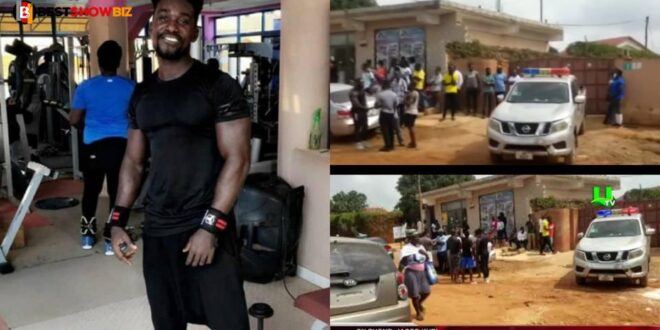 “Jesus help me”- Was the final words of Gym instructor little before he died.

Little, a 34-year-old gym teacher who was shot dead by unknown assailants in Tantra Hill for allegedly sleeping with a married woman, has been a big topic in Ghana for a few days.

Many bloggers gave the impression that the young man was shot dead because he was having fun with someone else’s woman, and this drew a lot of attention from readers. However, the alleged woman involved in this matter has come forward to clarify the situation.

The woman told a multimedia journalist that she was in the hall with her husband watching TV when she informed him that she needed to go since she had a show the next day.

Madam had to explain that she needed to leave because of the next day’s program and needed to get the most rest possible. Little had promised to escort her back from the restroom.

Read Also  Kumawood Actress cries for Dede Ayew to Just Touch Her "Akosua Kumaa", says it is her only wish

The woman opined, “That Wednesday, I went to visit Little at 9:30 pm; I got to his house at about 9:30 pm,” she narrated tearfully.

Yaa said she saw a shadow through Little’s bedroom window and alerted him, but he reassured her, saying it could be cats playing around the window.

Despite the fact that her deceased boyfriend had soothed her, Yaa said she returned to bed after seeing him take a kitchen knife. Yaa claimed she heard the sound of a key shortly after.

He awoke with a jolt after about 30 minutes, and blood was flying everywhere. When water gushes from a water hole, the blood just gushes out.

They continued their operation inside the house, and when I checked after 15 minutes, blood was gushing from his back. He abruptly stood up, the blood still oozing from his back. All he was saying was, ‘Jesus, please help me.’

He eventually died before the cops arrived.