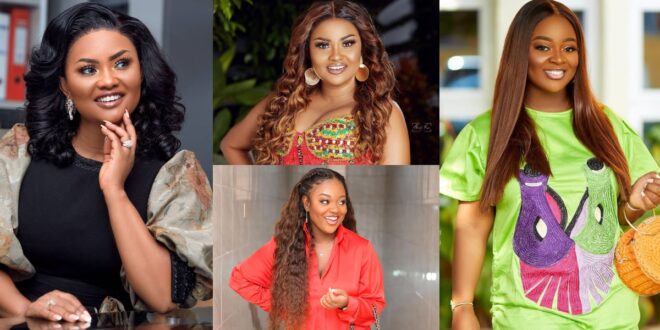 Jackie Appiah is a 37-year-old actress who was born in Canada.

She was born in Canada and lived there until she was ten years old, before she moved to Ghana with her single mother.

Jackie Appiah is the youngest of five children in her family.

Derrydown High School in Toronto, Ontario, Canada was where she got her early education.

Before enrolling at Achimota Preparatory School, she attended Faith Montessori in Accra.

She graduated from the University of Ghana with a Bachelor’s degree in Theatre Arts.

Jackie Appiah’s son, Damien Agyemang,  is 15 years old. Similarly to McBrown, Jackie has only one child.

Her net worth is estimated to be in the millions of dollars. Her Instagram account boasts 8.4 million followers.

In terms of her acting work, she has appeared in several films and television shows.

She is 43 years old and the presenter of the UTV food program “McBrown Kitchen” as well as the celebrity chat show “United Showbiz.”

She continued at Kwadaso L.A. J.S.S., despite the fact that she dropped out and was unable to take the Basic Education Certificate Exams.

She went on to receive a secretarial degree at the College of Business.

Mcbrown and her partner Maxwell Mawu Mensah have a daughter named Maxin Mawushi Mensah. Maxin is a two-year-old girl.