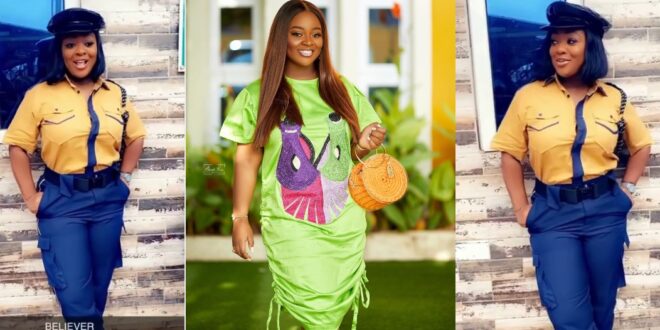 Popular Ghanaian actress Jackie Appiah has stormed the internet by surprise as she poses as security.

The Canadian-born Ghanaian actress who working as an actress has received several awards and nominations played as a security in a new movie she is working on.

Jackie Appiah, who won the Best Actress in a Leading Role at the 2010 Africa Movie Academy Awards in a video shared on her Instagram handle was heard saying she is the latest security in town while she was on set with a colleague actor.

The multiple award-winning actresses and one of the most loved and celebrated actresses in Ghana were looking so beautiful and elegant in her security uniform.

I think Jackie should have been enrolled as a military officer since the security uniform suits her perfectly in the photos and video as I sighted.

below are the beautiful photos of the mother of one posing as a security woman:

below is the link to the video as well;