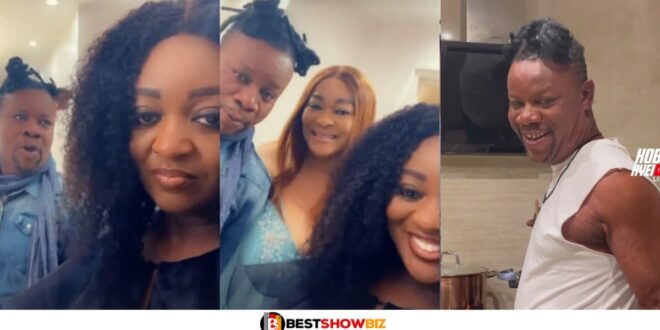 “Jackie Appiah doesn’t even know how to cut onions. I was the one cooking for her”- Nana Yeboah (video)

Nana Yeboah, a Kumawood actor, says he served as a cook for renowned actresses Jackie Appiah and Kalsoume Sinare Baffoe during their November 2021 visit to France.

According to the actor, he volunteered to cook lunch for his colleagues after noticing their lack of culinary abilities.

Jackie Appiah can’t cut onions, Kalsoume can’t cut tomatoes, so I decided to cook, and they ate everything.

During their European tour, the movie actors were greeted with a resounding welcome when they arrived in the arrival hall at Paris Airport to begin filming for the film “Fire and Ice.”

Samuel Degraft, a Ghanaian film producer, directed the film, which is set in France and stars all three actors.

On his first visit to Paris, Nana Yeboah proclaimed his love for the city and promised never to return to Ghana.