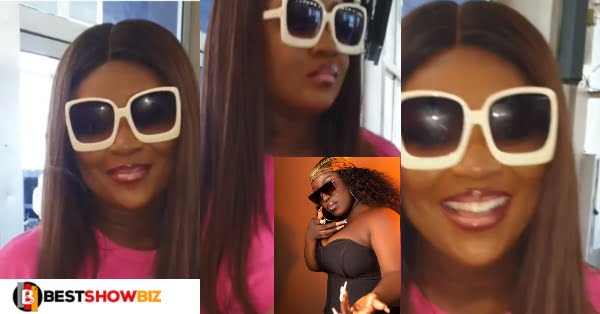 There’s too much talent! Apart from being a fantastic actress, Ghanaian actress Jackie Appiah is also a talented rapper.

The actress has been caught rapping like a pro at the airport as she prepares to leave the nation for her forthcoming birthday celebrations.

In a video that has been making the rounds on social media, Jackie Appiah can be seen being escorted by her crew when she is traveling outside of Ghana.

Jackie Appiah, her manager, Samira Yakubu, and two other people were seen in the film at the Accra Kotoka International Airport, where the video was recorded.

She dressed in a fashion-forward manner, as she always did, but this time she appeared to be more of an entertainer, specifically a rapper!

Her hypeman can be seen mocking her and pressuring her to perform a freestyle rap for the camera.

After her manager instilled confidence in her, actress Jackie Appiah rapped like a pro, much to the delight of the audience.

Meanwhile, Jackie Appiah will celebrate her one-year birthday on Sunday, December 5th, 2021. The actress will be 38 years old this year.

Some speculate that she’s on her way to relax in one of the exotic locations to which she’s accustomed to traveling, or that she’s off on a trip to gain a fresh perspective on life to commemorate her birthday.