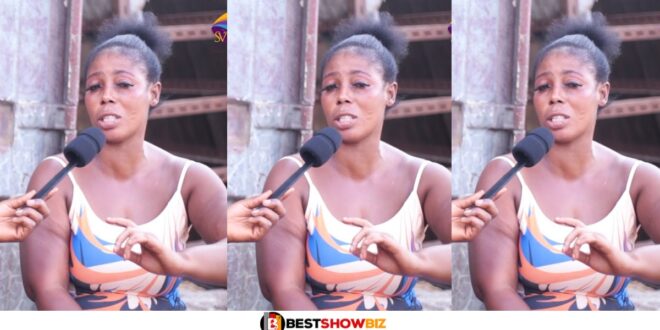 I’ve slept with over 2000 men in ten years, after divorcing my husband – Woman Reveals (Video)

Abigail Oye, 36, has revealed how she turned to prostitution shortly after her divorce. She revealed how many men she has slept with in her ten years as a sex worker.

Abigail revealed to DJ Nyaami on SVTV Africa that she left her marriage after her husband abandoned her at the hospital while she was in labor.

The divorcee revealed that they married at a young age and blamed her decision to divorce on being an irrational young girl.

“We got married after our firstborn, and we were still young at the time. Then I got pregnant with twins a few months later, but I lost them. I went into labor on Tuesday and gave birth on Thursday, but my husband was nowhere to be found.

I told my mom that I would divorce him after giving birth. I wish I were still with him now. I regret it when I look back. If I had listened to my parents’ advice to stay in the marriage, it might have helped me,” she said.

Furthermore, Abigail stated that she eventually came to Accra to work, but life’s difficulties drove her into prostitution.

Abigail described s3x work as a way for her to pay her rent. The 36-year-old told DJ Nyaami, the host of Ghetto Life Story, that she has slept with over 2000 men and “even more.”

Despite her regrets about being a sex worker, she can brag about funding two of her siblings’ secondary educations.

Read Also  Men Are L!ars, They Use And Dump Me Because of My Height - "Dwarf" Woman Cries Out (Video)

Abigail went on to say that it had always been her dream to support her younger siblings’ education because she couldn’t afford it herself.