Actress Sharon Ifedi of Nollywood has revealed that she is not yet ready to date, and that, to her knowledge, no man has formally proposed to her.

Ifedi first became interested in acting while she was in secondary school.

Sharon emphasized in a recent in-depth interview that no man has made any moves toward her to initiate marriage with her.

She said that this is because no man is interested in marrying her.

“No, I have not. And no one has approached me for marriage.

As for the qualities that I would you like in a man, that would come when I come of age because I don’t know anything about men right now.

I am just focusing on my career. I am not in any relationship. I am not dating anybody. But of course, men would always say they like me,”

Read Also  Age Is Just A Number: Video Of Beautiful Bride Grinding Her Old Groom At Their Wedding Stirs Online

“I used to despise the fact that I had to get up early, leave my siblings at home, go to work, and return late at night.

So, it was really stressful. Now, that’s not really a big challenge anymore because I’m used to it; and I like the person that I’ve become and would still be. However, my challenge now is the roles that I’ve not played, because as an actress you need to be versatile.”

“I have had several embarrassing moments with fans. I could remember one time that I was on the red carpet taking pictures at an award ceremony and a male fan jumped out of nowhere to hug me.

I did not expect it. I was shocked because the person didn’t want to let go, and the people around had to come help to take him away.”

Read Also  Gospel singer Gifty Adorye uses the Bible to defend herself for dressing like a slay queen. 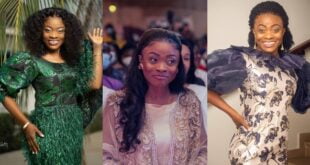