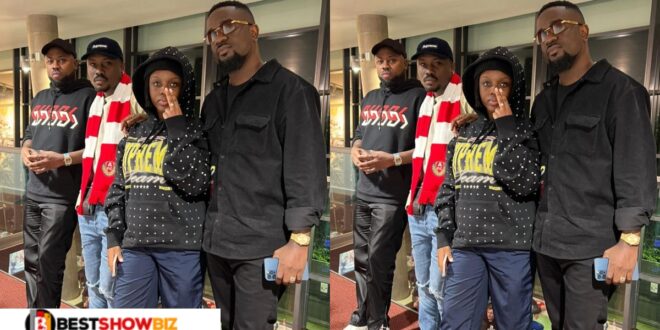 Fans are ecstatic after rap artist Sarkodie and Ghana’s current queen of music, Gyakie, were photographed together in London, the United Kingdom’s capital.

The two posed for a shot that has gone viral and is generating excitement among admirers.

Gyakie has been in the United Kingdom for a few days now, doing performances and establishing connections.

King Sarkodie was also in the area, and the two ran into each other and took advantage of the chance for a picture opportunity.

They posed with two other folks for a shot.

Sarkodie wore his characteristic specs and appeared to be his normal cool, calm, and collected self.

As she threw up the peace sign in the shot, Gyakie appeared ecstatic.

Here’s a look at Sarkodie and Gyakie in London…