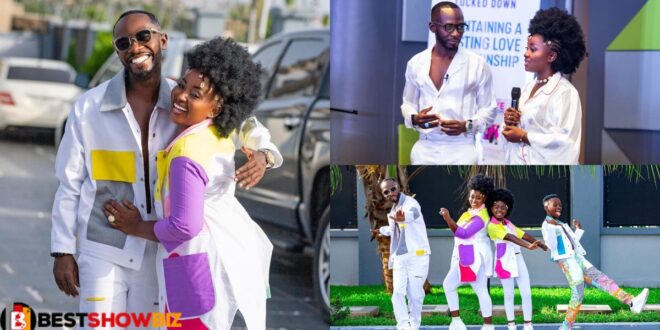 “It is not wise to take a loan for your wedding, my marriage cost me just Ghc 300”- Okyeame Kwame.

Following his admission about the expense of his marriage, Kwame Nsiah-Apau, also known as Okyeame Kwame, has shocked Ghanaians.

The pair revealed to Johnny Hughes on the New Day show that they chose to have a simple wedding because they had to make so many compromises in order to understand each other.

According to Annica, Okyeame Kwame’s wife, she desired a simple wedding while her husband wanted a huge one, but after several discussions, he agreed and they went with the basic one.

”Aside from the rings that we bough, it cost us 300 cedis to marry, but this was 12 years ago. What it was was that I did not want a very elaborate activity. So what I believe and Kwame does too is that the marriage is not the ceremony. What happens between the two of you. So all we needed were witnesses, that’s all”.

Okyeame Kwame went on to say that all he and his wife did was sign at the registration and then eat at a local chop bar for lunch. ”There were seven of us who went to the KMA (Kumasi Metropolitan Assembly). We signed, and that was the end of it. That, I recall, cost GHS150 at the time. After that, we traveled to Adum, Kumasi, to eat fufu. It is finished. The marriage was over.”

The couple did not think it was a good idea for people to take out loans in order to have a costly wedding.