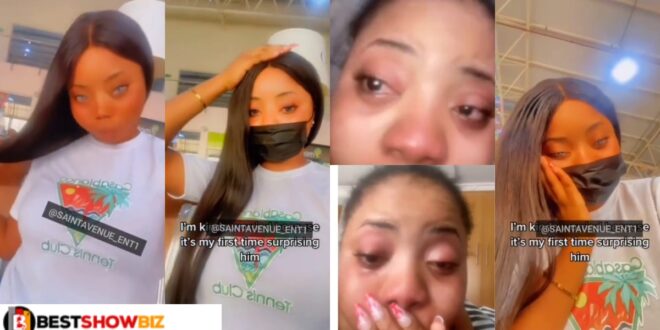 A Nigerian woman told her heartbreaking tale in a not-so-detailed video that has been circulating online.

According to this lady, who concealed her boyfriend, she decided to surprise her lover by traveling to the state where he resided.

The lady showed herself at the airport, about to take a flight to meet him, in the video she published on TikTok.

According to her, she was worried because this would be her first attempt at paying him a surprise visit.

Her suspicions got justified, as it resulted in tears upon arrival at his residence. The ending segment of the video shows her weeping as she leaves his apartment.

Read Also  24-year-old boyfriend k!lls his 35-year-old girlfriend for cheating on him in Obuasi - Video

Meanwhile, she did detail what resulted in her tearing at the end of the video but netizens were quick to speculate that she might have met another lady in the room.