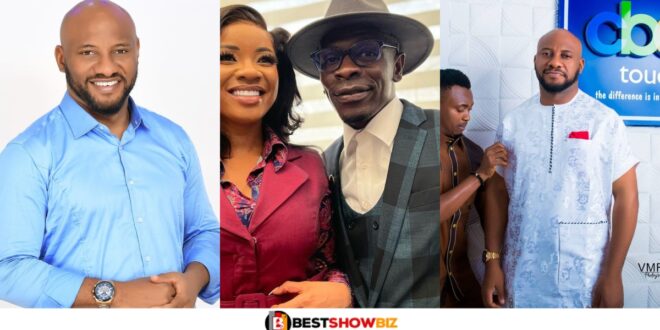 Shatta wale threw shades on Nigerian artists while performing at his Freedom Concert rapper Medikal at the Accra Sports Stadium.

In a viral video, The levels singer is heard as he labeled Nigerians artiste as “stupid”. “They said I won’t be able to fill my own stadiums, I don’t need any Nigerian artiste to sell out Ghana’s stadium, f**k Nigerian artistes”. he stated

His harsh message to singers in Nigeria attracted a clap back from their music lovers and fans of these artists.

Read Also  Free Show! Watch as a Lady displays her tonga in public while twerking

The latest to add his voice is the Nollywood legend, Yul Edochie. Reacting to this, the actor asked Shatta Wale to apologize immediately for his rude comments.

According to Yul Edochie, Shatta Wale’s choice of words is “extreme and too low” for a man like him. He went on to advise Shatta wale (whom he claimed he was a fan of) to rather use his large fan base to promote peace and unity among Africans and the rest of the world.

“I’m a fan of your music. Your track with Beyonce is always on repeat in my car. No matter what is pissing you off, a man like you with a large fan base should be using it to promote peace and unity among Africans and the rest of the world. You should apologize for such a statement,” Yul stated in an Instagram post.