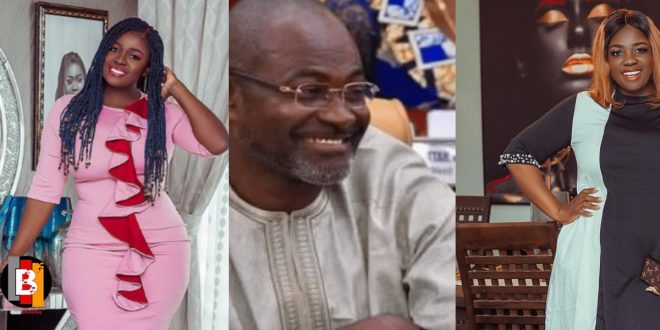 The current richest East Legon landlady, actress Tracey Boakye has finally apologized to MP Kennedy Agyapong after calling him all sorts of names.

it could be recalled that, during the ‘Papa No’ saga, Kennedy Agyapong sat on his TV station and made some damning revelations concerning former President John Mahama and Tracey Boakye.

Which made the actress went live on Facebook several times and rained a whole lot of insults on the MP.

well, Kennedy Agyapong as we reported earlier in just a recent interview revealed that all that he said about the actress and the former president were just jokes.

with that, Tracey has shared a video in which Kennedy Agyapong said he was just joking as she also apologizes for raining insults on him.

“JOKING??? Really??? Ok, Hon Kennedy Agyapong, I beg you not to joke with such issues again, especially during an election period, No Politician has bought any house nor cars for me, My Man is not a politician. I AM ALSO SORRY FOR THE HARSH AND DISRESPECTFUL WORDS I USED FOR YOU, you’re like a father to me, and I’m your daughter. SO SORRY, and please such jokes are too expensive. THANK YOU ?”.