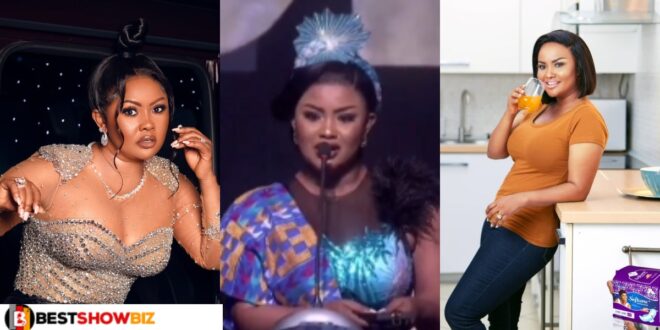 The prestigious GUBA award is a Ghanaian award show based in the United Kingdom that recognizes the achievements of outstanding African women.

Yaa Asantewaa, a Ghanaian heroine who died a century ago, was commemorated in the 2021 edition.

McBrown received a special award titled “The GUBA Yaa Asantewaa Entertainment Mogul” among the people who were honored.

Her unfathomable impact on the entertainment industry was particularly praised.

McBrown made people cry during her acceptance speech when she reminded them that she had no formal education.

Nana Ama McBrown describes herself as a product of people who, despite not having a certificate, have made an impact on society through their dedication and perseverance.

The mother of one then dedicated the award to all women who believe life is behind them and that there is no point in continuing because they have reached a point where they can no longer push themselves.