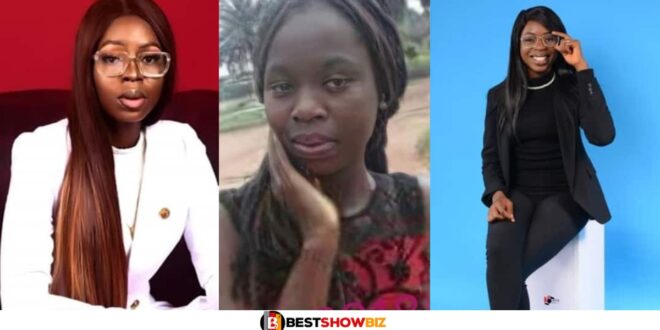 “I’m No Longer a House Girl”: Beautiful Lady Shares Her Transformation Photos From Grass to Grace

Peace John, a lovely young lady who worked as a housekeeper, posted a throwback photo of herself on the job.

She compared an old photo to a recent one in which she appeared more beautiful and well-kept.

All does not appear to be well with the young lady in the old photograph, as she stated that she was subjected to hard labor at her workplace.

According to a LinkedIn post, she was paid less than GH50 per day, which was insufficient to meet her needs.

“3 years ago I stopped being a house help. With less than GH₵50 (approximately $6 at that time) a month as salary. To add to this misery, it was not even the salary that was my problem, but the hard labour that followed.

“I did it so that I could afford to pay for my fees back in college, but unfortunately I ended up missing some papers in my final exams because my college fees was not complete, I was really pained.”

She stated that she eventually decided to leave her job in order to find something better.

Peace, who was a student at the time, agreed to become a house girl in order to feed and pay her school fees.

“I started from College of Education Ekiadolor, Benin and proceeded to the University of Benin. I became a house help so I could feed and pay my school fees while I was in school.”

However, because she did not pay her fees, she missed a paper in the final exams for her B.Ed in Early Childhood Education and had to return the following year to rewrite and graduate.

But now, she claims that her situation has improved because she is now an online couch making a lot of money after graduating and leaving her miserable job as a maid.