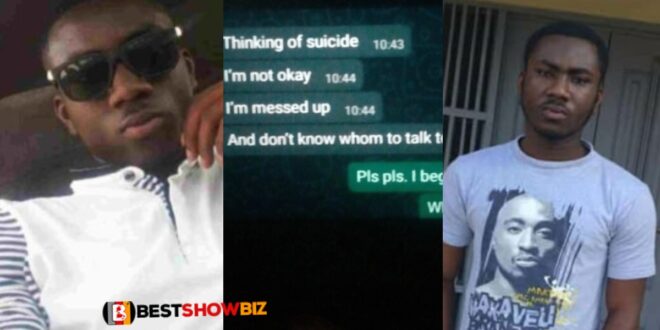 I’m messed up: Last WhatsApp message of KNUST student who hanged himself pops up

We reported on the tragic news circulating on social media about a level 400 student from the Kwame University of Science and Technology (KNUST) who allegedly took his own life by hanging.

The deceased owned a couple of individuals worth GHC200,000, according to the details surrounding his death, and he f00lishly chose to place a bet of 60,000 dollars in order to win a jackpot and pay off his obligations.

Unfortunately for him, he lost the bet and was unable to handle the pressure coming from the people he owed and chose to end his own life.

Well, we have chanced on his last WhatsApp conversation, in which he threatened to take his own life because he was “messed up.”

Though the unknown friend he was chatting with told him to come down and that they should meet the next day to solve whatever the issue was, the deceased couldn’t wait but chose to end his own life.

below are screenshots of his last Whatsapp message;