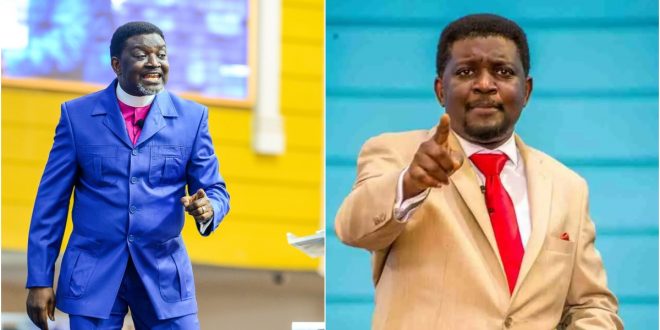 The founder and leader of Word Miracle Church International, which is now Perez Chapel International, Bishop Agyinasare has disclosed that he is never bothered about the Insults and threats from some Ghanaians.

according to him in his sermon yesterday, the more Ghanaians insults and threats him the more he will come out and talk about national issues.

according to Agyinasare in his sermon as monitored by Bestshowbiz.com, most of his friends and loved ones have “pleaded with me to stop preaching what I am preaching on national transformation”, adding that “Most of them say Ghana is set in her ways and would not change”.

in his word, the self-acclaimed man of God said; “Well, Jonah did not believe wicked Nineveh would change but when he declared God’s word, they repented and fasted in sackcloth and ashes”.

he added that the word of God “has the power to change people: it is a hammer that can break hardened hearts, it is a fire that can consume, it is like water that can wash the most sin covered soul, it like a light that can shine on the power of the worst of sinners”.

Bishop Agyinasare as he was preaching revealed that his loved ones have pleaded with him to stop talking about national issues due to the attacks that have recently come on him.

“Some of my loved ones said these politicians and their supporters, hmmm; they are dangerous ohhh! they can do something against you”. To him, if that’s “how we see politicians now, is there not a cause for me to preach to change it?”

“My amazement is whether it has come to the place in democratic Ghana, where I speak and people who are not happy (basically they disagree with me) and instead of they saying they disagree with me and stating their side, some of them issue threats, some insult me and people are saying: ‘Charles, you must be afraid, beef up your security and don’t sleep at home’”.

“Well, our senior politicians, H.E Nana Akufo-Addo and H.E John Dramani Mahama, that is how much your noble profession has been reduced to. It is being said and perceived that you and your fellows hire thugs to beat and even get people killed because they disagree with you. Meanwhile, the Akan name for democracy is ‘Ka bi na me ka bi aman buo’ – ‘speak your mind and let me speak my mind’ kind of government.

he quizzed; “Is there not a cause to tell our politicians to stop teaching our populace that it is OK to insult our opponents, including elders instead of addressing issues?”, especially as 1 Peter 2:17 says: ‘Honour all people. Love the brotherhood. Fear of God. Honor the king”.

reacting to using some uncouth words to clarify journalist in his previous statements, Bishop Agyinasare said:

“Some said: ‘Bishop, you used insulting language when you used [the phrase] ‘dumb dogs’”.

“No sir, no madam. The scripture said: ‘His watchmen have become dumb dogs’”.

“I used it in reference to our journalists and pastors who must warn us as dogs do”. Isaiah 56:10, he quoted, says: ‘His watchmen are blind, they are all ignorant; they are all dumb dogs, they cannot bark; sleeping, lying down, loving to slumber’. I was also accused of insulting by using attack dogs. Well, because our common language is English, I took a word from the Merriam Webster’s dictionary, which explains ‘attack dogs’ as persons noted for harsh, personal, and usually public verbal attacks against others. E.g. a political attack dog”.

he concluded that; “I am the last person who would want to insult or disrespect anyone”,