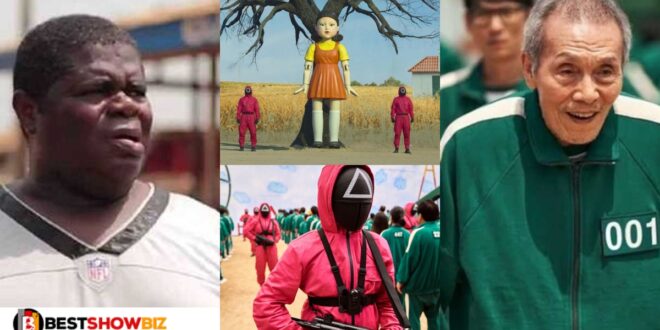 “If you want more money Join Squid Game” – Netizens tell T.T after he said he wanted GHC 8,000 to pay ECG

Following the revelation that he owes the Electricity Company of Ghana (ECG) an amount of GH8,000, one Twitter user has requested that legendary Ghanaian actor, Psalm Adjetefio, better known as TT, appear in Netflix series “Squid Game.”

After receiving a large quantity of money from Vice President Bawumi as a result of an earlier complaint, the actor from the film “Taxi Driver” said in an updated interview that he is unable to pay his energy bills, which are GHC8k in total.

TT said in an interview broadcast on Citi TV that personnel from the Electricity Company of Ghana originally presented him with a charge for GH4,500, which he claimed was an accumulated debt he had accumulated over time.

He said that he had previously paid a GH2100 charge that had been handed to him by the electricity distribution company.

“They came to my house to turn off my electricity. They informed me that I owed GH4,000. How? So, what exactly are you saying? You haven’t been giving us bills, have you? ‘Well, you owe money,’ they explained. When we arrived to the ECG office, I inquired as to the nature of the position. The fact that you haven’t been delivering us the bill, and now you are telling us that we owe [this amount] and that you’ve come to disconnect us,” he said on Citi TV.

I was about to give up hope when my son came to tell me that everything we’d been paying was a “estimated bill” and that the true amount was GH 8,000. “I thought I’d cleared the whole thing up when he said it was a ‘estimated bill,'” he lamented.

As a result of the interview, several Twitter users have urged the actor to appear in “Squid Game,” Netflix’s record-breaking popular series that has garnered widespread attention.