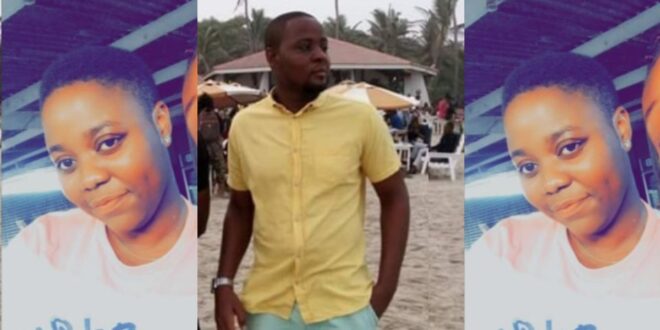 ‘If you hear I have been murdered, this guy here did it, he is my ex-boyfriend’- Lady reveals on social media

Since their split, she says he has made her life a living hell, bombarding her with insulting calls and messages, threatening her on several occasions, and stalking her.

She describes how he broke into her house recently and she had to call the cops to get him to leave.

She believes she has reported the problem to DOVVSU but has received no response.

Naa believes she’s used social media to let people know who’s to blame if anything negative happens to her.

“At some time in the future, whether you think that I’ve been killed, or that acid has been spilled on me, or that I’ve been pounded to a pulp, you should know that this man here did it!” she exclaimed.

Domestic abuse cases resulting in death have been recorded in recent weeks, but it’s important that women who speak out get the assistance they need before things get worse.

I didnt want to do this initially but i think i will now. Especially, in this era, where abuse is actually becoming a thing.

At any point, at all, if you guys ever hear that iv been murdered or acid has been poured on me, or beaten to a pulp, you’ll should know, this guy here did it!

My crime – i was in a relationship with him and i broke up with him!

In the last 3 – 4 months, the kind of abuse iv had to go through from this guy, is nothing to write home about. From threats, to attacking my friends around me, to blackmails, to verbal abuse, y’all got no idea. Some close friends around me like Sara Lee, Gemini Goddezz, Akwesi Osei, Ravam Rovema and a few I’ll not want to mention, have all one way or the other encountered what is going.

For Akwesi, he was actually attacked by this guy just because i took a picture with him in my room. He actually scheduled a fight with him, showing him where he stays and telling him not to come fight him alone, since his body wont be found. For Fiifi Bright he created a fake account, threatening him for ruining his relationship (Fiifi posted that some 2 weeks ago. Those who remember)

There a lot of others he did, i wouldnt want to talk about here.

Why am i doing this now? This guy has promised to make my life miserable in the coming weeks! Those who know what iv been through in his hands these past few months know this is not an empty threat! He helped me with a sum of about 1600 last year, as a gift, to sort out something. He says he wants his money back. Iv promised to pay. I have some things i used to use in my shop packed at his place. Initially, Verbspub Kassah Raymond asked me to pack the things to his place but this guy talked me into bringing the things to his’ instead. Told him i needed a place to put the things for about 6 months, just so i set up a new place. Today this guy is on my neck to come pack the things out. Iv told him I’ll.

Iv been to Madina DOVSU to report, nothing good came out of it. For months, i had to wake up to tens of messages everyday from this guy, calling me a whore, telling me how im less of a woman, yet he was managing me, calling me ungrateful, threatening me, cursing me, then begging me for a come back. At a point, he boldly told me ‘he for come kpokpo me in my house small’, so i know he wasn’t joking about me.

For weeks i couldnt sleep peacefully in my own house. Yesterday, from nowhere he showed up at my place late at night, cursing me and promising to create a scene. It took the help of me calling the Madina Patrol Team for him to bolt away. I fear for my life, honestly. So yeah, his name is Alex Tetteh.And No, im not a drama queen.

I think this medium is the only way to stop him now. I reported him to Madina DOVSU unit. I dont know if the women there were in love with him. They rather ended up kissing his a**. My brother in law Augustine Aboni who is supposed to also stand up for me is also on his side, just because they are friends. I told him i was getting a restriction order. It hasnt moved him.

I reported him to his elder brothers. Theyve done all they can to bring him to order. Its not working. Iv employed all possible means. It’s not working. I hope this does!!!