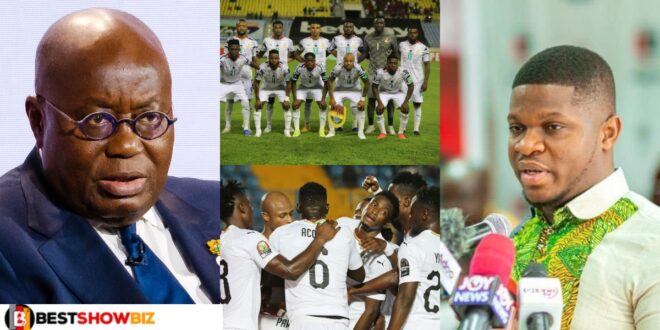 “If the Blackstars fail to qualify for the FIFA World Cup, Ghanaians would hold Akufo-Addo responsible” – Sammy Gyamfi

According to the National Democratic Congress’s (NDC) National Communications Director, Ghanaians will not forgive the President of Ghana if the national team fails to qualify for the World Cup.

Sammy Gyamfi said on Asempa Fm’s Ekosisen show that Ghana failed to qualify for the 2018 World Cup under President Akufo-Addo, so the 2022 World Cup is a rematch for him.

Ghanaians, according to Sammy Gyamfi, will not forgive the President if the national team fails to qualify for another World Cup during his tenure.

“Ghanaians will not forgive Akufo-Addo if Black Stars fail to qualify for the 2022 World Cup in Qatar,”

“The players have done their best so far but I think we can’t afford to miss this world Cup.

“We failed to qualify in 2018 under Akufo-Addo and I don’t think Ghanaians will forgive him if we fail to qualify for the 2022 World Cup in Qatar.

“This is a resit for Akufo-Addo and his government but should he fail this time around, we will not forgive him,” he added