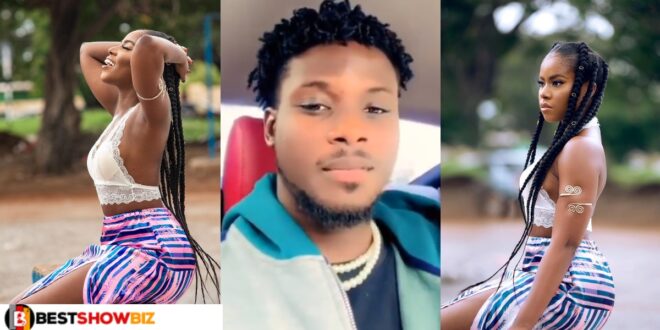 “I wrote most of your hit songs; why disrespect me?” – Kuami Eugene goes hard on Mzvee (video)

Kuame Eugene has urged his former record label mate, Mzvee, to correct the record and cease making it appear as though he never influenced her musical career.

The Rockstar had a conversation with celebrity blogger Zionfelix in which he stated unequivocally that he was the mastermind behind the majority of Mzvee’s songs and that she should always be open about this fact.

Eugene addressed this issue when Mzvee stated in a prior interview that he relied on her celebrity to get noticed.

Mzvee also stated that comparing new musicians to old ones is difficult. She stated that she has been in the profession for nearly a decade and that Kuami Eugene is now experiencing the “craze” that she experienced some time ago.

Read Also  Fear Women: "My mother forced me to call her sister so she can get married to a new man"- Man narrates

“Comparing us [MzVee and Kuami Eugene] is like comparing a young musician like Yaw Tog to Sarkodie.” Sarkodie has already attained the kind of celebrity that Yaw Tog is currently experiencing, such as producing videos and receiving a million views in a single day.”

“I feel that comparing new with old is a bit tough because I have enjoyed the mania that he [Kuami Eugene] is currently having.” Next year marks my tenth year in the music industry. He is now engrossed in the same kind of mania that I was. As a result, comparing the two is extremely difficult. I don’t think the two can even be compared.”

Against this backdrop, Kuame Eugene has stated that Mzvee should not act as if she has never profited from his creativity.

Watch the entire interview below.