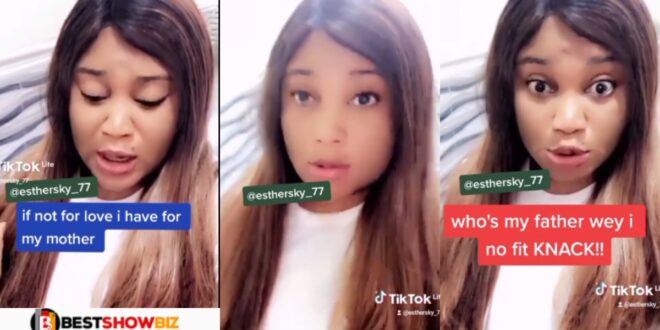 “I would have slept with my father if it weren’t for the love I have for my mother.” – Lady reveals (VIDEO)

In a video circulating on the internet, a slay queen known as Esther Sky makes a very bold yet strange assertion.

The Nigerian lady, whose true name is Nwachukwu Ifeoma Esther, claims she wants to sleep with her own father because he is gorgeous.

Esther Sky stated in the video that the prospect of her mother finding out is what is preventing him from carrying out his sexual fantasies with him.

She claims she is keeping herself from sleeping with her father because she does not want her mother to die of a heart attack.

‘If not for the love I have for my mother and I do not want my mother to die who is my father wey i no fit knack,’ she was heard saying in the said video.