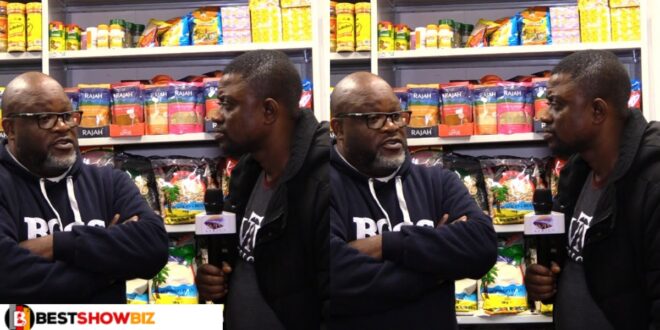 “I Worked In A Prost!tut!on House When I Was In Russia” – UK Based Ghanaian Man Shares His Sad Story (VIDEO)

Maxell Mannesmann, a Ghanaian living in the United Kingdom, has shared his heartbreaking story about working in a brothel in Russia after his scholarship was canceled.

He also mentioned selling illegal drugs in Russia in order to survive back in the 1980s.

Mr Maxell Mannesmann made the admission while speaking with DJ Nyaami on SVTV Africa.

Maxell told how he had to sell drugs in Russia to survive after his government scholarship was abruptly canceled.

According to him, they were asked to return to Ghana by the late Rawlings, who was president at the time, but he could not afford a ticket. As a result, he was forced to sell drugs in order to survive.

“It was one of those government scholarships that was withdrawn a year into the program.” We were kicked out of school, and most of our colleagues had enough money to buy their way back home. “Some of us didn’t have the money and had to struggle through,” he explained.

He revealed that as a result of this, he was forced to work in a brothel and sell drugs in order to survive. “I had no idea what the job entailed, but they needed people to work with, so I agreed.

” They assigned me a two-bedroom apartment. “I have a bicycle and I have to ride it to different houses, collect the money, sign for it, and then move on,” he added.

Read Also  “If you let me go hungry while we are dating, I will leave you for another man,”- Bella Daterush

Maxell stated that after a year, he made the decision to relocate to Germany to further his education. Because he was an illegal immigrant, he had to travel for four months in the back of trucks to get to his destination.