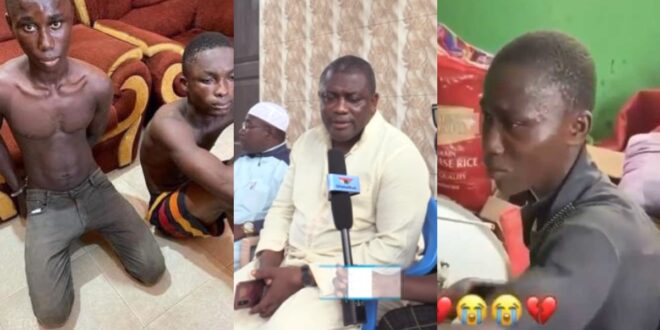 ” I will take the law into my own hands if the boys are not given life in prison”- father of k!lled 10-year boy speaks (video)

If proper justice is not done, the father of a 10-year-old boy who was reportedly murdered by two teenagers for rituals at Kasoa has vowed to take the law into his own hands.

Two young men, ages 18 and 19, are reportedly in police custody, helping with the investigation into the murder of a 10-year-old boy for ritual purposes in the Central Region’s Awutu Senya East Municipality.

The deceased, just known as Ishmael, was discovered dead in an uncompleted building.

“I had returned from a long trip after I had left home for Oti Region, early hours of that Saturday,” Mr Abdallah told the show’s host, Aduanaba Kofi Asante Ennin.

“We had breakfast with my son and the rest of the family. I eventually retired to my bed, exhausted from my long journey from Oti Region to Kasoa. I was startled awake a few minutes later to learn that my son had been killed.”

The father, who couldn’t stop crying as he described his last meeting with his son, pleaded vehemently for a thorough investigation to bring justice to his son.

Furthermore, when the deceased’s father was interviewed by Ghana media, he repeated what he said in his Akoma FM interview, meaning that he is greatly saddened by his son’s passing.

Meanwhile, Deputy Public Affairs Officer for the Central Regional Police Command, Sergeant Isaac Evans Ettie, has appealed to the public for help in solving the apparent mysteries around Ishmael’s murder.