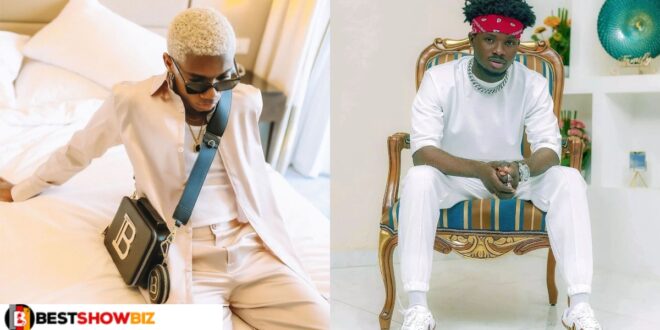 “I will never talk about Kuami Eugene Again” – Kidi

KiDi, who is signed to the same record label as Kuami Eugene, has vowed never to speak about his half-brother from a different mother again in the public eye.

It is claimed that whenever the “Say Cheese” hitmaker and the young self-styled sugar daddy expresses an opinion about one of his fellow Lynx Entertainment artist’s, he gets into trouble, which results in internal wrangling at the label.

He went on to say that, despite his best efforts to always speak positively about Kuami Eugene, bloggers and other arms of the media have consistently twisted his words, making him appear to be a bad person in the process.

KiDi, who appeared to be in great distress while speaking about his personal issues with Kuami Eugene, went on to say that he has been attacked a number of times by fans of the “wele sebe kontomire” singer, who have claimed that he envies their music idol, which is why he indirectly bashes him during interviews.

During an appearance on UTV’s United Showbiz program over the weekend, the singer expressed his displeasure with the situation between him and Kuami Eugene, saying that he didn’t want to cause any more trouble.

Following a question from the show’s host, Abeiku Santana, about whether or not he and Kuami Eugene are engaged in any sort of personal competition, he was forced to retract his statements.

Read Also  Bechem: Twene Jonas's hometown chiefs curse him with libation and animal sacrifice to die before the year ends.

The award-winning singer has categorically stated that there is no form of competition between him and Kuami Eugene as far as he is concerned, but he has no idea what the Rockstar’s thoughts are on the matter.