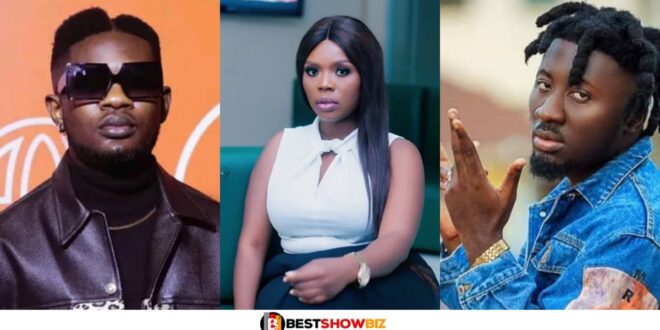 “I will never apologize to Delay for dissing her”- Lyrical Joe

lyrical Joe has made it clear that he would not apologize to award-winning presenter Delay because, as a result of his conflict with her “lover,” Amerado, he owes her no apologizes.

Readers will recall the recent bitter literary conflict between Lyrical Joe and Amerado.

During the heated argument, Deloris Frimpong Manso, also known as “Delay,” was hit by a bullet from one of Lyrical Joe’s diss recordings.

Many people called him out after this and demanded that he apologize to the presenter because she isn’t the one with whom he is exchanging lyrical blows.

Lyrical Joe, though, made it clear in a recent interview that he would never apologize to Delay.

He claimed that Amerado stepped over the line when he included his deceased parents in their argument, which got to him.

He also said that he wanted to make Amerado mad, so he thought about bringing in Delay, who is said to be Amerado’s lover.

Delay was also taking part in the online argument at the time, especially on Twitter, so Joe made it clear that he didn’t think it would be dangerous to let her in.

Read Also  "She is the woman i love and want to be with"- Lady shares video chopping love with her lesb!an girlfriend