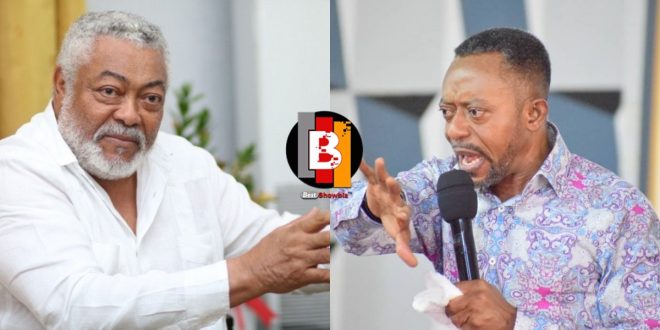 I will mention the Killer of Rawlings after 7th December – Rev. Owusu Bempah (Video)

It’s no longer news that the former president Jerry John Rawlings has died. He died on the 12th of November 2020 at the Kole Bu Teaching Hospital.

Rawlings’s death has brought a lot of controversies as some people claim his death is not natural and that someone is behind.

well, according to the NPP man of God, he saw the death of Rawlings coming but didn’t let it out since he was scared of the attacks.

speaking in an interview on Net 2 TV, the founder and leader of  Glorious Word and Power Ministries says he knows the Killer of Rawlings and that he will menstion the name after 7th December (elections).

“There are a lot of issues about Rawlings’ death but I will come out after the election. No one should say that he died a natural death. My church members will bear witness to what I said about late President Atta Mills. I prophesied by Amissah Arthur’s death but they did not take me seriously”.