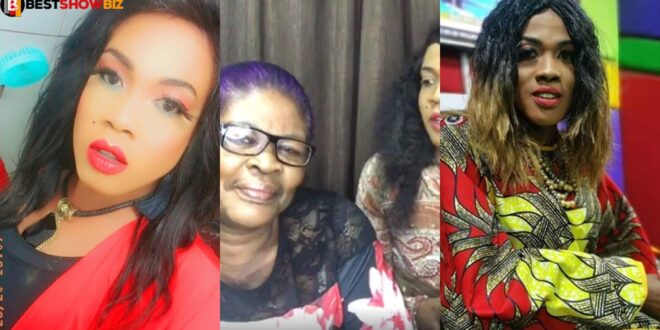 Angel Maxin, a Ghanaian transgender woman, has sent a stern warning to President Akufo-Addo about the upcoming LGBT Bill.

According to the enraged woman, she is willing to go to any length to ensure that her daughter and other members of the LGBT community live in freedom.

She has stated that she is willing to strip down and confront President Akufo-Addo once he is ready to approve the LGBT Bill.

Angel Maxin’s mother cried her heart out in a long video, asking for the government to embrace the LGBT community and allow them to live their lives freely as long as they don’t hurt others.

Such individuals, she claims, also deserve to live their lives since they are God’s creations and were made in God’s image.

After setting up an office and attempting to advance their rights, the subject of LGBT has attracted the attention of Ghanaians for some time.

Following that, a movement sponsored by Ghanaian politician Sam Geroge is attempting to criminalize the LGBT community’s and supporters’ actions.

They are now lobbying for the passage of a bill titled “The Promotion of Proper Human Sexual and Ghanaian Family Values Bill” in order to curtail LGBT activities.