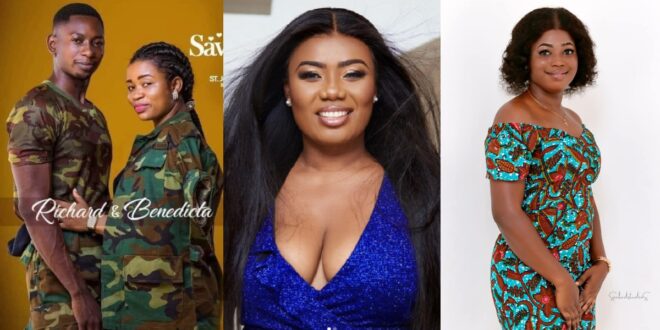 “I will be happy if Comfort Gets her Ghc 30,000 back from Richard Agu”- Bridget Otoo

Comforts’ decision to recoup her missed investment is endorsed by Bridget Otoo, but she urges her to move on.
As Comfort Bilss responded to a flyer of her ex-boyfriend getting married today, March 20th, social media was ablaze.

The lady claims that her then-boyfriend persuaded her to take out loans to help him fund his mission to become a military man, but that he then abandoned her and is now planning to marry another woman.

Richard Agu, the man in question, denies the charges leveled against him by his ex-girlfriend, but she has threatened to storm the wedding grounds and trigger a ruckus.

Read Also  "If marriage is easy, let everyone try some and pass"- Nana Ama Mcbrown to critics

Reacting to the hullabaloo Bridget Otoo’s said  though she would be satisfied if comfort is able to get her money back from the man, she should find the courage to move on.