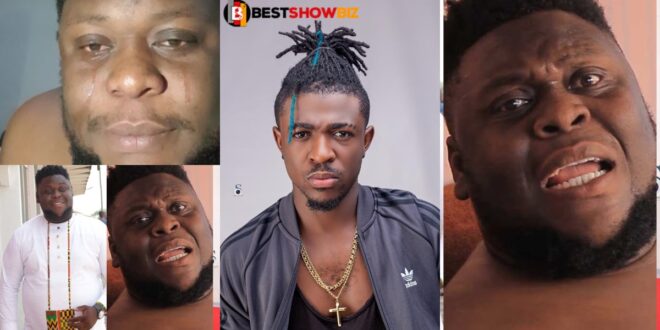 Actor/musician from Kumawood; Oboy Frank Naro has rekindled his feud with Oteele, claiming that if he encounters him face to face at any time of day, he will beat him up and teach him a valuable lesson.

These threats were made during an exclusive interview with Poleeno Multimedia in which Oboy Frank Naro sounded and acted enraged.

He accused Oteele of pushing some movie directors not to cast him and other actors and actresses he despises throughout the interview.

Oboy Frank Naro went on to say that Oteele is responsible for the majority of petty fights in the movie industry, and that he should be held accountable and punished for his bad deeds.

When asked why he would beat Oteele in a fight, Oboy Frank Naro explained that he nearly died of hunger because producers refused to cast him because of Oteele’s nasty counsel to them.

He further said that Oteele branded him as a black sheep in the eyes of the majority of kumawood movie stars.

Oboy Frank Nero also expressed his feelings on the local film industry’s collapse. Producers and directors, according to him, are the main cause of the once glorious film industry’s downfall.

He claims that one of the main reasons Ghanaians abandoned Kumawood for Bollywood is because actors and actresses are given improper roles.

He also asserted strongly, without fear, that he is quite delighted that Kumawood is no longer active as it was a few years ago, but he refused to explain why.